This month we have a guest blog from journalist and cookbook author Sarah Rainey on why she is giving up food waste for Lent.

On Tuesday night, along with millions of others up and down the country, I ate pancakes for dinner. This year, I didn’t even bother with the token savoury course… I went straight to a stack of big, fluffy American-style pancakes, slathered with gooey Nutella and topped with berries. Basically the dream dinner (although I’m not sure my arteries would agree).

But Pancake Day – or Shrove Tuesday as it’s properly known – is about more than stuffing our faces. Traditionally, the aim was to have a massive feast to use up the indulgent foods in the house – eggs, butter, sugar – before the 40 days of Lent began.

Sure, it has religious origins, but if you strip it back to its basics, it’s all about food waste. Crazy to think that thousands of years ago we were thinking about using up leftover foodstuffs so they didn’t end up in the bin.

Several millennia may have passed, but sadly those early intentions seem to have fallen flat. In 2019, food waste in the UK is worse than ever. According to waste reduction charity WRAP, the average British family throws away £810 worth of food a year, amounting to £20 billion – or 7.3 million tonnes – of household waste a year.

Globally, the scale is even more astonishing. According to the UN’s Food and Agriculture Organisation, this equates to 1.3 billion tonnes of food worldwide – equivalent to more than half of the world’s annual cereal crop.

At the same time, 795 million people in the world are suffering from chronic malnutrition and undernourishment. In the UK alone, 8.4 million people struggle to afford a meal. What we’re doing is not only shameful, but it has an enormous and cruel human cost, too.

So what can we do about it? As someone who works a lot with food – I’m a freelance journalist and cookbook author – it’s something that particularly concerns me, and I’m becoming more and more aware of the sheer amount of perfectly-good food that gets thrown out after articles and photoshoots. 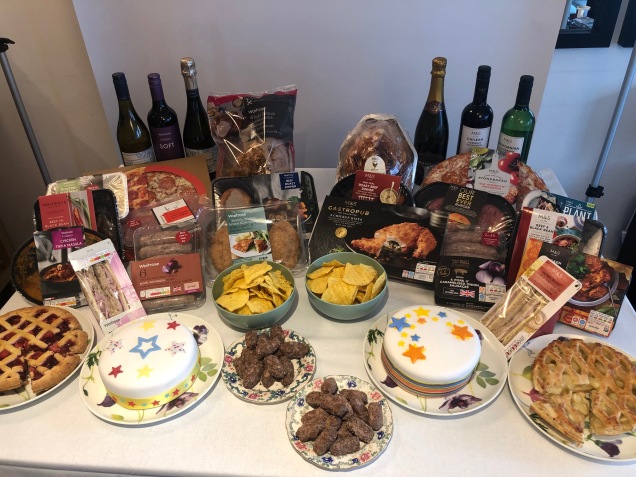 Food left over after a recent shoot – all saved by using the OLIO app.

Some of the worst instances I can remember in recent years include: two entire Christmas dinners (one involving a goose; the other a turkey) being chucked in black bin bags after a festive photoshoot; the remnants of a dinner party – including canapes, crisps, wine, champagne and a pie – ending up being dumped because nobody wanted to take them away; three perfect replicas of cakes from the Great British Bake Off being left in the corner of an office to go mouldy; and countless examples of free press samples of biscuits, crisps, fresh and frozen meals, vegetables and soft drinks simply being binned because nobody could be bothered to find them a home.

Listed like that, it’s a horrifying indictment – and that’s just what I’ve witnessed in my own work. Recently, however, I’ve started taking a stand against food waste, thanks to a clever initiative called OLIO. Set up by two food-lovers in 2015, OLIO is a community-based sharing platform for surplus food, enabling users to advertise food they’re looking to give away – and connecting them with others nearby who have a use for it.

I downloaded the app on my phone six months ago and I’ve never looked back. Items I’ve donated on the platform to date include: a selection of festive cheeses (don’t ask… one was Wensleydale and gin-flavoured), a random selection of alcohol minis (including Dubonnet – the Queen’s favourite drink), and – most recently – a haul of leftover food from a shoot comparing M&S to Waitrose, including ready meals, crisps, two whole chickens, burgers, sausages and veggie lasagne.

You can also give away non-food items on the app. I’ve recently found happy homes for an old (but perfectly functioning) trouser press, and a set of four slightly-rickety kitchen chairs.

Not only is it a chance to get rid of surplus produce without throwing it in the bin, but it gives you the opportunity to meet other, like-minded people in the community – and make a connection in the process. The lovely woman who came to collect my most recent OLIO offering told me she shares food with her neighbours, and messaged again after distributing it to say how delighted they all were with it – and how they were planning a huge communal feast.

The great thing about OLIO is the convenience: you don’t have to go anywhere, as it only connects you to people nearby, so chances are someone will come and collect leftover food directly from your door. There are, of course, lots of other options out there: most big supermarkets have food donation points near the tills, and you can give directly to a food bank, of which there are 1,200 throughout the UK.

On an individual level, the solutions are relatively straightforward. It’s just a case of knowing what’s out there – and making a conscious effort not to take the easy option and throw food you no longer want, or that’s on the cusp of going off, in the bin. On that note, the government’s Love Food Hate Waste website has a whole host of recipe ideas for using up leftovers – from hasselback potatoes to spiced dahl.

The bigger picture is a little trickier. It’s all well and good donating a few bits here and there – but what about the national food waste issue; how do we solve that? FareShare is one of the initiatives at the forefront of this problem. Its army of volunteers redistribute surplus food from the catering and hospitality industry to almost 10,000 frontline charities and community groups in 1,500 towns and cities, where it’s needed most. Last year alone, they handled enough food for 36.7 million meals.

Big supermarkets have a key role to play in all this, with many partnering up with FareShare and similar charities (especially around Christmas time) to encourage shoppers to donate. But many have gone a step further and set up food waste initiatives of their own.

I recently attended an event at a community centre in North London, where Tesco is joining forces with Jamie Oliver to launch a landmark Community Kitchen. The aim is to train 1,000 community cooks – both in London and across the country – on how best to use the surplus food that’s donated to them on a daily basis by neighbouring supermarkets, giving them the skills and confidence they need to feed those in need. 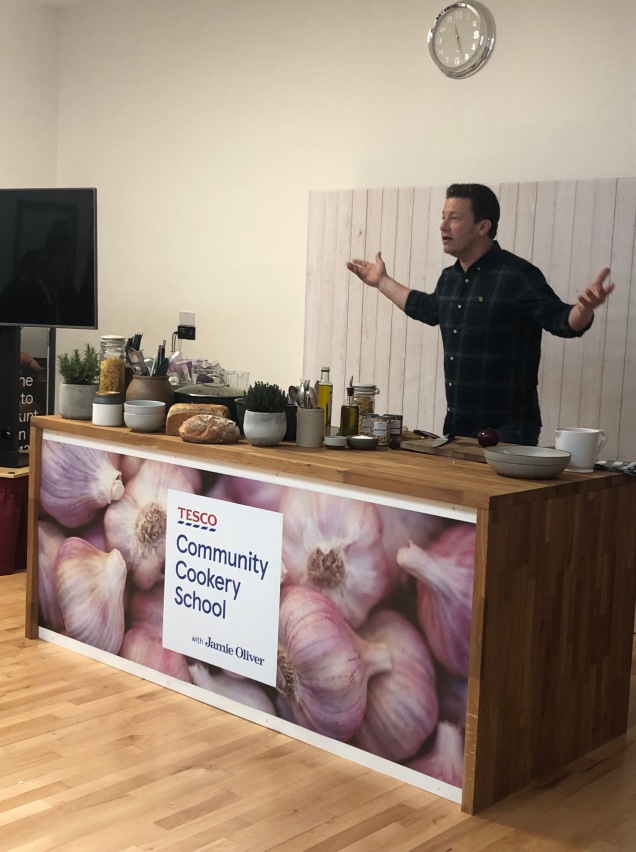 Jamie Oliver in full flow at the Community Kitchen event

While many of them are experienced in the kitchen, the problem, Jamie explained, is that surplus food is so unpredictable – 100 sweet potatoes one day, 10kg lentils the next – that it can be difficult to know how to turn it into nutritionally-balanced meals. As an example, he whipped up a dish in under ten minutes: minestrone soup, made with tomatoes that were past their best, crushed bits of leftover pasta, and some parmesan cheese that was heading for the bin. And I tell you what, it tasted AMAZING. Proper proof that ‘food waste’ doesn’t have to be wasted at all.

So, next time you find yourself clearing out the fridge, or hovering over the bin about to throw something perfectly edible away, STOP RIGHT THERE. Could you turn it into something tasty? Or could you give it away to someone who could? The answer, I’ve found, is pretty much always yes.

Join me, for the next 40 days, in giving up food waste for Lent. It could be the start of a lifetime habit – and it’s definitely a better option than depriving yourself of chocolate or crisps.